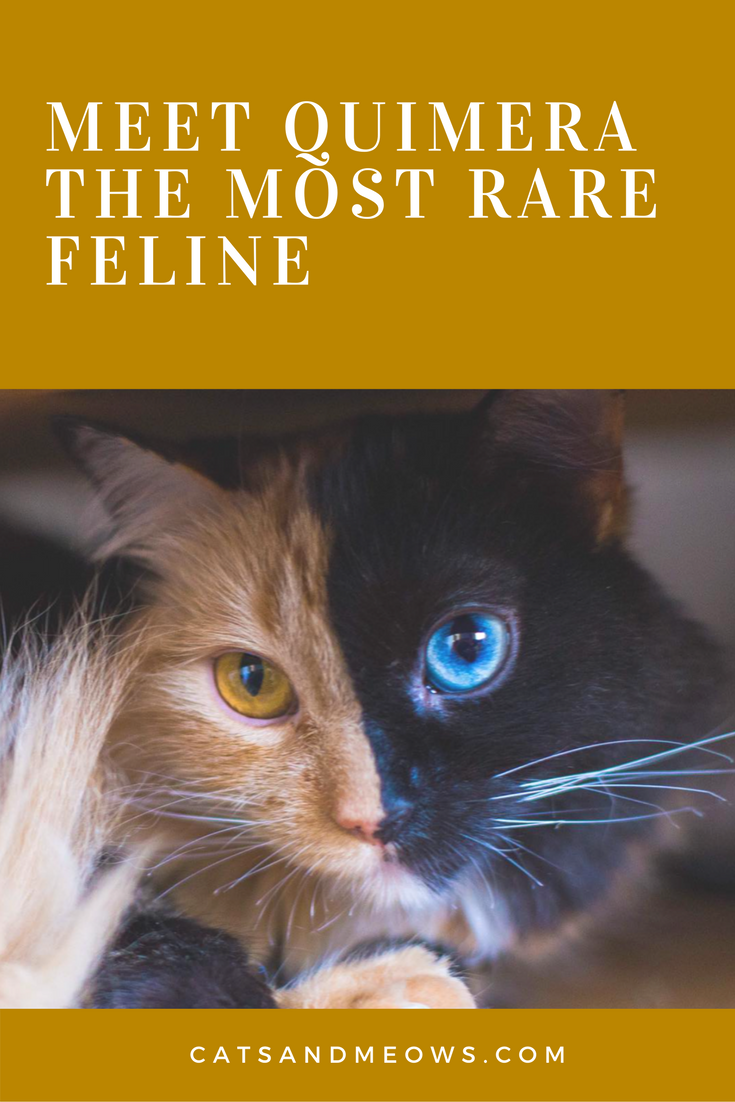 Watch out Kim Kardashian, a contending cat is going to take the throne for breaking the internet. Meet Quimera, the rarest feline has been dubbed a “Two-Faced” cat that is taking over the internet. This gorgeous kitty is quickly becoming a star. This amazing cat has one blue eye and one amber colored eye with a striking coloring that is a very striking black and gold. This coloring is obviously extremely rare.

It’s quite possible Quimera is a chimera, however, the odds of a true chimera is an anomaly. Columbia University Professor of Genetics and Development Virginia Papaioannou explained to the New Republic, “A chimera is a composite individual that was made up of cells from at least two different original embryos. If they fuse together early enough, they will become a single organism whose genetic input is from two completely different individuals. In a mosaic, there’s only one individual and it just happens to have different genetic components active in its cells. A chimera would be a much more unusual and unlikely event.”

The professor believes Quimera is more likely a rare form of a calico cat. Using science to prove the theory, Papaioannou stated, “It’s a fairly straightforward example of X-inactivation mosaicism, with the addition of a white spotting gene. All female mammals have two X-chromosomes,” explained the professor. “In a cat, one gene for fur color is located on the X chromosome. And in any female, expression of all the genes that are on the X chromosome will be ‘mosaic’ —that is, half of them will express one version of the gene (e.g., black fur) and half will express the other version of the gene (e.g., orange fur). The inactivation is random. Here we are talking about the orange/black mosaicism, which is highly visible, but the same pattern will hold true for other genes on the X that have two different versions — or alleles.”

As for the explanation for the different colored eyes, it’s a pigment issue. “It must be the white spotting gene that’s affecting her eyes because the blue eye has a lack of melanin. This cat has white spots on the chest … the white spotting gene, the piebald gene, is probably affecting the two eyes differently. One has a sort of normal color and one is blue, which is basically a lack of pigment,” according to the expert.

True chimera or not, Quimera has a following that is growing by the second. Currently, Gataquimera has nearly 36,000 followers.

Cat Acne is Real – The Surprising Causes and Treatments

Cat Declawing – The Painful Facts Including Which State BANNED the Procedure