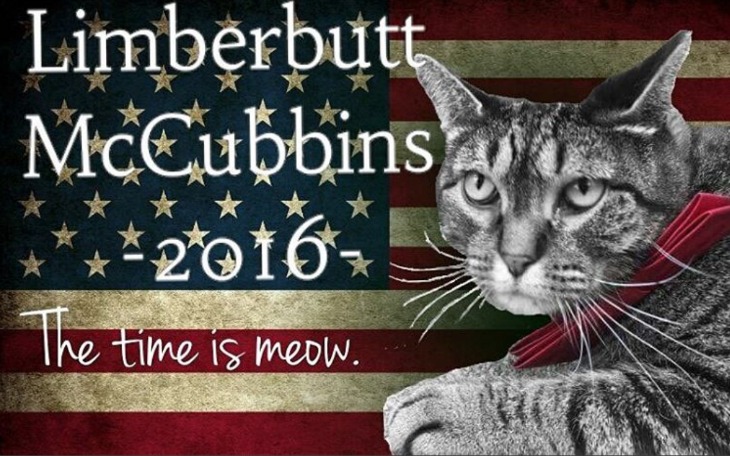 Limberbutt certainly is not your traditional Democrat – he’s not a well known politician by any means, just an adorable cat hailing from Kentucky. According to The Washington Post, the adorable feline has some pretty interesting positions on gay cat rights, tax codes, and the middle class. Oh, and is campaign slogan is, “The Time Is MEOW.” Kind of catchy, wouldn’t you agree?

Believe it or not, Limberbutt’s owner Elliot Weiss didn’t enter his cat in to the 2016 Presidential Election to make a mockery of this Fall’s crazy campaigns, instead he is hoping to raise awareness. Weiss explained to the Washington Post, “I would argue that people today have become fed up with the two-party system. Limberbutt, for them, is an outlet to voice their frustrations and have a political discussion with a true outsider and hopeful Washington fat cat.”

Of course, this also brings to light once again the hilarious wording in the US Constitution, in which they don’t specify that a candidate must be a human. Limberbutt is not the first animal to run for President, and he probably won’t be the last – but at least his crafty owners are using his campaign as a crafty way to raise awareness.

If you want to learn more about Limberbutt Mccubbins, you can check out his official Facebook Page right here!

Annemarie is a Mom whose daughter (Robyn) has left the nest and now she is traveling the world experiencing everything the world has to offer. You can find her sipping martinis in some of the most exotics locations in the world, having a beer at her local pub or canoeing on a beautiful lake in the Adirondacks.

Should You Feed your Cat Wet Food Or Dry Food?

Is Halloween Dangerous For Black Cats?