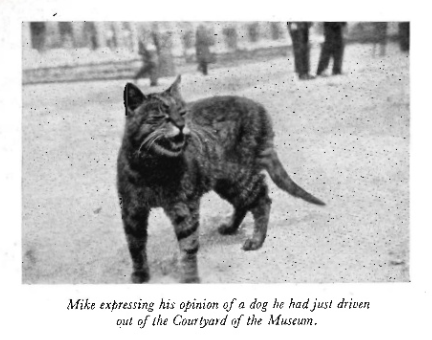 Law enforcement officers use canines daily in the line of duty but have you ever heard of a feline assisting in law enforcement? There are probably more crime fighting kitties out there, but these are the five who made an impression.

Mike became the guardian of the gates at the British Museum in 1908 helping the guards keep an eye on those that visited. Mike came to stay at the British Museum when the Black Jack, another cat who prowled the hallways, delivered a gift to the Keeper of Egyptian Antiquities feet. The gift was a kitten that would be named Mike.

When Mike died in 1929 the former Keeper of Egyptian Antiquities wrote a pamphlet, an ode to the feline. In 1979, the Golden Jubilee of Mike’s passing, an illustrated pamphlet was published in his honor.

Russian cat Rusik became an important part of law enforcement’s from the say the hungry Siamese stumbled into customs checkpoint in the Stavropol region bordering the Caspian Sea.

Rusik was recruited by border police when Officer Sergei Kovalenko discovered the feline had an uncanny ability to sniff out illegal cargoes of sturgeon and caviar.

Rusik proudly worked at the customs checkpoint for a year before he died in the line of duty. The sturgeon-sniffing feline was struck and killed by a vehicle he had previously busted carrying illegal cargo.
In 2006 Brooklyn Deputy District Attorney Carol Moran adopted 4-month-old Fred Wheezy, a cat with half a working lung, from an animal shelter and gave him a very important job. Fred went undercover in a sting operation which resulted in the arrest of an unlicensed veterinarian medicine.

Fred was presented with a Law Enforcement Achievement Award for all his hard work in bringing the sting to a successful conclusion.

Known as Fred the Undercover Cat nationwide, the crime fighter died at the age of 15-months when he was struck by a car outside his Queens, New York home.

Canadian cat Snowball became an unlikely link to the 1994 disappearance of Shirley Duguay. Four days after she vanished, Shirley’s car was found a few miles from her home but there was no sign of her anywhere.

Police immediately suspected that David Beamish, Shirley’s common law husband, was in some way involved in her disappearance.

An intense searched turned up a leather jacket stained in Shirley Dugay’s blood. In addition to the blood investigators found 20 white hairs on the jacket. Tests revealed that the white cat hairs belonged to Beamish’s cat Snowball.

The judge at the trial allowed the DNA evidence linking and Snowball to Doug Beamish. After the jury was presented with the evidence they found Beamish guilty of second-degree murder and he was sentenced to 18 years in prison.

Annemarie is a Mom whose daughter (Robyn) has left the nest and now she is traveling the world experiencing everything the world has to offer. You can find her sipping martinis in some of the most exotics locations in the world, having a beer at her local pub or canoeing on a beautiful lake in the Adirondacks.

Cat Health Insurance: What Questions Should You Ask?