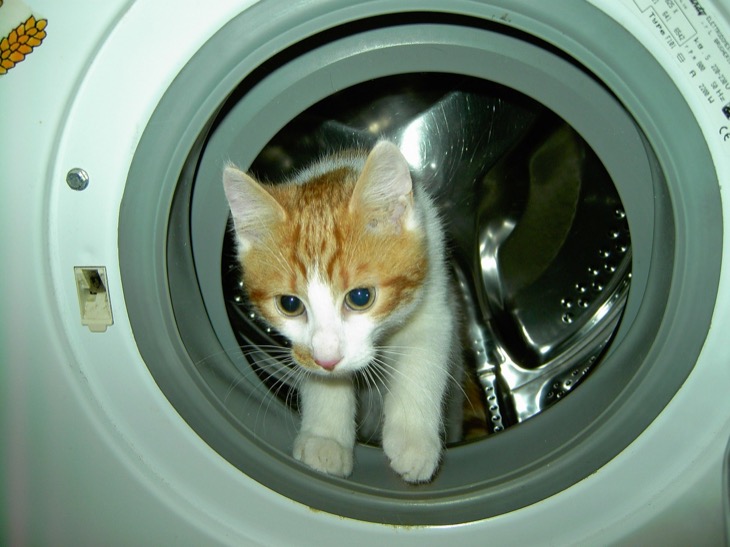 The washing machine is no place for a cat nap as Bobby, a Bengal crossbreed, discovered. Bobby’s owner Lisa Keefe was in a hurry and threw a load of laundry into the machine and turned it on not realizing that Bobby had crawled back into the washer for a nap.

Poor Bobby, who lives in the United Kingdom with his furry mommy, survived the spin cycle but needed to be treated for shock with an IV drip and an overnight stay at the veterinary hospital. Lisa told The Times, “Bobby has been known to climb into the washing machine, so I always keep the door shut and keep him away when adding when adding a new load.”

Don’t blame Lisa too much for not paying attention. Bobby’s owner had already taken him out of the washer once that day but he snuck back in and hid under a duvet. Hearing a noise coming from the machine Lisa asked her husband Kevin if he knew Bobby’s whereabouts.

Lisa rushed to get Bobby out of the machine and he was treated for trauma at a local veterinary clinic in Nottingham. Tamsin Thomas is the vet and in 15 years of practicing veterinary medicine had never see a case as severe as Bobby’s. The cat’s body was soaked through and his temperature was dangerously low.

After all this Lisa believes Bobby has learned his lesson, he hasn’t been near the washing machine since the terrifying incident. That doesn’t keep Lisa Keefe from being extremely careful when using the washer. The feline mom triple checks to see if Bobby is in the machine before turning it on.

Bobby has been nominated for the veterinary charity PDSA’s Pet Survivor Award.

NOTE: The cat in the photo with the article is not Bobby