Larry the Cat Stays At 10 Downing Street: Continues As Chief Mouser To The Cabinet And New Prime Minister Theresa May 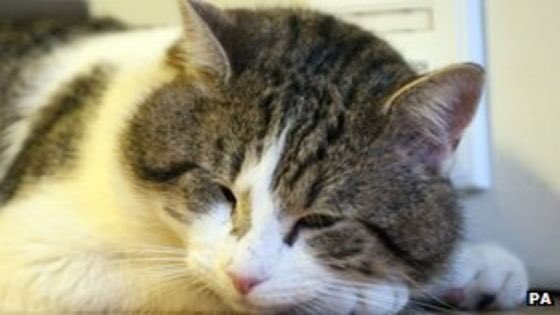 Larry the Cat will remain in residence at 10 Downing Street and will be the chief mouser for England’s new Prime Minister Theresa May. Larry’s official title is Chief Mouser to the Cabinet Office.

Declared Larry is a civil servant’s cat by the British government, Larry and therefore he will not leave with outgoing Prime Minister David Cameron. Larry the Cat has lived in the Prime Minister’s residence since 2011.

What do we know about Larry? He’s a tabby from London’s Battersea Cats and Dogs Home. He has a “strong predatory drive.” When not using his stills as a mouser Larry enjoys playing with mouse toys to keep up his skills.

Larry was brought to 10 Downing Street in to tackle the rat problem after a large black rat was caught on live television scurrying across the doorstep at the Prime Minister’s residence.

Larry the Cat isn’t the first feline to stroll the halls at 10 Downing Street. The last official Chief Mouser to the Cabinet Office was Humphrey who walked in one day during Margaret Thatcher’s time as Britain’s Prime Minister and stayed until his retirement in 1997.

In the 1920s Rufus of England held the position at the Prime Minister’s residence. In the 1930s and 1940 Munich Mouser patrolled the grounds and kept things safe from rodents. In the 1970s Wilberforce was tasked with the job of chief mouser.

Larry the Cat was a bit worried about whether or not he would keep his job. Larry has his own Twitter account and tweeted July 10, “One final thing before they’ll let you have the job @TheresaMay2016 – tell the people you’ll keep me in Number 10.”

One final thing before they'll let you have the job @TheresaMay2016 – tell the people you'll keep me in Number 10.

Does anyone know a good cat groomer available tomorrow? I need to make a good impression on someone on Wednesday…

What Is A Cat’s Life Expectancy? Pets Living Longer And Healthier Lifestyles Than Ever Before