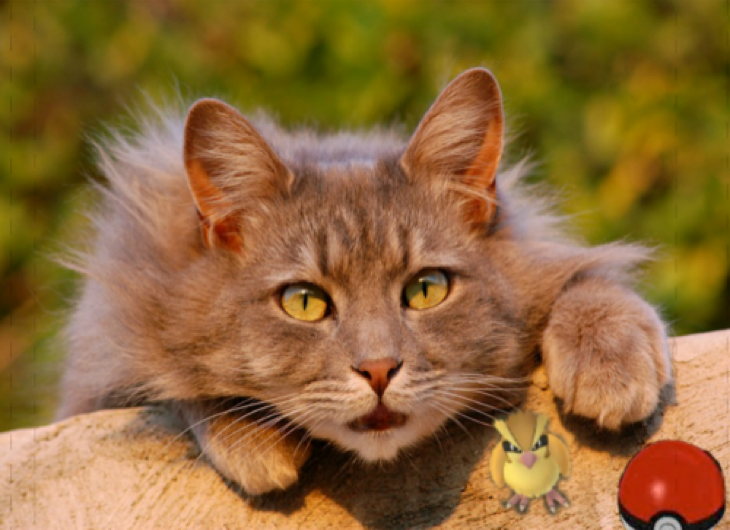 The Pokemon GO craze is getting a bit out of control these days. Who wouldn’t want to spend all day taking a break from your adult life and wandering around outside looking for bright colored mythological creatures on your cell phone that can’t be seen with the naked eye?Our cats are expert hunters. And, yes, our expert hunter cats spend several minutes out of their day stalking prey that isn’t actually there. However, contrary to an absurd rumor that just won’t seem to die, NO! your cat can’t see, sense, or catch Pokemon.

Our cats are expert hunters. And, yes, our expert hunter cats spend several minutes out of their day stalking prey that isn’t actually there. However, contrary to an absurd rumor that just won’t seem to die, NO! your cat can’t see, sense, or catch Pokemon.

The game is 100% virtual, and by no means does it project any kind of floating pink creature in your living room. But, somehow, for some reason, someone out there started a crazy rumor that your cats and dogs can “sense” Pokemon GO creatures when they are close by. And, apparently, your super skilled feline might be able to see the Pokemon that are not visible to the naked eye.

We’re not sure why we even have to say this, but the claims are 100% FALSE. Guys, your cats can’t see Pokemon! The rumor most likely originated from all of the super cute screenshots that have gone viral that clever Pokemon GO players took with their cats and somehow made it seem that their cats were looking directly at the creatures on their screens. Any skilled Pokemon player with some screenshotting capabilities can snap the photos.

You Might Also Like —> Russian Cat Runs For Parliament: Not First Feline To Seek Office In Russia

Of course, it is believed that your cats can sense spirits or even ghosts. But, again, the Pokemon creatures do not actually float around your house! Regardless, the pictures are super cute. Check them out and let us know what you think in the comments below!